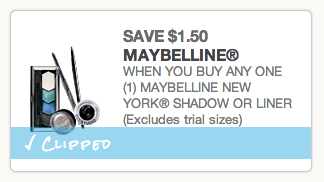 Here’s a new high value makeup coupon! Head over to Coupons.com and print the $1.50/1 Maybelline New York Eye Shadow coupon while you can. It stacks nicely with a Target coupon to make the singles only $0.44 at Target!

Maybelline coupons normally don’t last very long on Coupons.com, so if you are interested in getting this deal, I would print sooner rather than later!