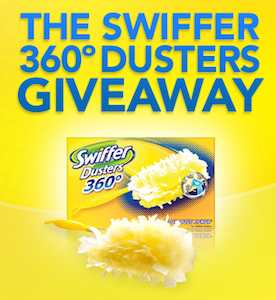 With thousands of deep-cleaning fibers, Swiffer 360° Dusters reduce 90% of allergens from cat and dog dander and dustmite matter by trapping and locking the dirt found in grooves and crevices.

Join over 300 people and ‘Like’ the Frugal Finders Facebook page. You’ll find great conversations with other deal seeking readers, and I sometimes post time sensitive deals there.