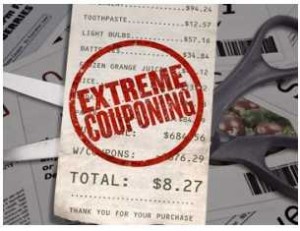 If you watch any television at all, you have probably seen one of the many shows (or at lease a commercial about them) dedicated to what has become known as “extreme couponing.” If you have actually watched any of these shows, you probably have a pretty good grasp on what this extreme hobby is and how it’s done. However, if this is the first you are hearing about it, first of all, you don’t watch enough TV. On a serious note, though, there are some things that you might actually want to know about extreme couponing, as it has become a pretty major trend across the U.S. lately.

When most people think about coupons, they think about saving money. This is definitely accurate, and even more so with extreme couponing. The people who do this often spend hours upon hours a day cutting out coupons and searching for the best deals around. They take this hobby and turn it into almost a full time job, which ends up saving them thousands of dollars in only a few short grocery trips. If you want to save money but don’t know how, this is the answer you are looking for.

Extreme couponing does not have to take hours a day; however, if you are willing to commit to that kind of time, you will obviously reap the rewards of your work. A fun way to get the job done without having to do it all alone is to ask the kids to help. If you are a stay at home mom and you have the kids home with you during the day, make cutting coupons into a contest or a game.That way, everyone is involved and the work gets done really quickly.

One thing a lot of people don’t understand, however, is that although extreme couponing does not necessarily mean you spend all your extra time finding deals, it does mean you definitely do spend a lot more time searching through magazines and newspapers than the average person does.

Extreme coupons will often go to some pretty crazy lengths to save a buck here and there. However, in the end, all of this insanity actually pays off, literally. To be an extreme couponer, you have to be willing to sacrifice your time in order to save your money. You have to have a certain mindset that you really don’t care about what other people think and that you are going to do what it takes to get the deals you want. Often times, people in the grocery store might look at you funny when it takes you twenty minutes to check out, but you know that it is worth it in the end, so you don’t care. That is what really sets the regular couponers apart from the extreme ones.

Another thing that you might not know is that, although it may be time consuming and take a little bit of a different lifestyle, extreme couponing is totally doable. Anyone can coupon, and it is actually fairly simple. It is definitely a lot easier, though, if you have an organized personality.

People who are very good at keeping things in order will find it a lot simpler to cut the coupons, put them nicely into a binder of some sort, plan out shopping trips according to the certain coupons, and get the trips done in the shortest amount of time possible. However, even if you are not super organized, extreme couponing can save you so much money that it’s definitely worth a shot.

Mary Payne is a blogger and content writer at Frugal Coupon Living. She loves shopping online for everything using coupon mom and enjoys blogging about economical living.